Concerns about the Amy Monument at Thirroul Beach. 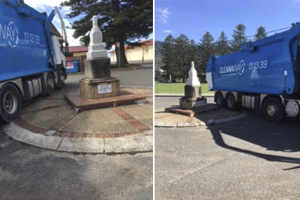 Would you be interested in running a story about the Amy Monument at Thirroul Beach? This marble memorial commemorates the sinking of the little collier Amy in a terrible gale
In February 1898 with all hands lost despite the valiant efforts and bravery of Thirroul people to save them.

As you can see in the photographs the Amy Monument is in a precarious position stranded on a roundabout at the entrance to Thirroul Beach. The Cleanaway truck cannot negotiate the narrow roadway in order to empty the skip bins in their enclosures and must drive over the roundabout within a hair's breath of the monument. I spoke to the driver and received his permission to take the photos. He loathes this pick-up and told me that there are some places a truck should not go and over the Amy monument roundabout is one of the worst.

Ongoing emails including an on-site visit with Mr Peter Coyte, Assets Manager WCC to discuss the re-positioning of Amy have now been going on for over a year and have been disappointing. The latest missive from him informs us that re-siting has relegated to capital spending for next year and he advises, 'lets see where it lands'.

We fear that by that time Amy may be irreparably damaged, then dismantled by WCC and dumped in the back-blocks of some depot, forgotten, never to see the light of day again. It could easily be taken off its plinth and placed  on the grassy knoll in the playground opposite where the children picnic and play under the pines.

Amy stands today, albeit precariously, as testimony to the generosity of a Thirroul community, now passed, which erected the monument in perpetuity to remember the tragedy of Amy and to show that they cared. It is the present, living generations who must honour their thoughtfulness and their legacy, now, before it is too late.

I have invited Councillor Greg Petty WCC to attend the session with you if you feel it is newsworthy. He has agreed. Tuesdays are best for us.

I look forward to hearing from you soon.