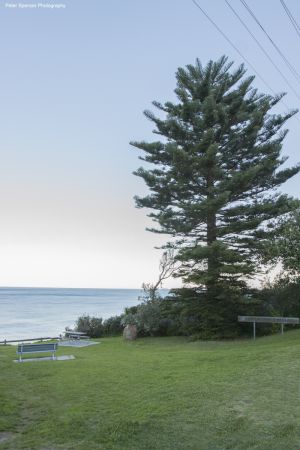 “DHL Society member John Ruffels attended the unveiling of a plaque in Thirroul in honour of D.H. Lawrence

It has taken so many years to get a plaque erected in honour of Lawrence's time in Australia that it is somewhat appropriate that we are only now recording the unveiling which occurred on Saturday 21st November 1998 - a red letter day in the cultural history of Thirroul.  After a campaign stretching back some three years, a large bronze medallion and plaque dedicated to the stay in Thirroul of English writer D. H. Lawrence and wife Frieda, were unveiled in the postage stamp park at the south end of Craig Street before a surprisingly large crowd of some 120. Chairs were lined up facing the seafront, a raised platform and podium before them. A brisk Nor' Easter divided the locals from the "blow-ins'': the locals sat on the sheltered side, the out-of-towners on the other.

The inimitable Thirroul 'Godfather' of major events, Don Gray, O.A.M., presided as Master of Ceremonies, dressed in an Edwardian morning suit, silk cravat and bowler hat, this veteran of past monument-raising campaigns (he was responsible for the Wollongong Miners monument, and the relocation of the Thirroul ship-wreck monument) handled the ceremonials with aplomb and dexterity. The initiator of the whole idea, Joanna Stilton, looked quite Bloomsbury in her long sunders dress and straw hat. Nervous at first, she warmed as the proceedings flowed smoothly. She had said she was determined to keep the event simple and unpretentious.

Don Gray briefly outlined the importance of D.H. Lawrence and his novel to himself as a long- time Thirroul resident. He then introduced the Lord Mayor of Greater Wollongong, David Campbell, who wore his mayoral chain of office and read a message of congratulations from New South Wales Premier, Bob Carr. A flutter of excitement spread through the crowd when Mayor Campbell announced the arrival of the Official Guests: "D.H. Lawrence'' and "Frieda'' who arrived in a vintage car. Looking considerably thinner than her last visit, "Frieda'' looked splendid in her scarlet Charleston 'flapper' dress, cloche hat and pearls!!! "Lawrence'' too, looked much healthier than any of his photographs, and seemed to be positively affluent in his brown morning coat and top hat.

Joanna Skilton then outlined the reason she began her determination to erect a memorial to Lawrence, Frieda, his visit and his novel Kangaroo, saying we need to remember great men like Lawrence so we can learn from them and continue to be inspired by their work and lives.  Despite the passage of some 75 years, there had been, prior to this, nothing to mark the fact this eminent English writer had ever set foot in Thirroul. This monument would provide a focal point for literary pilgrims, just along the street from 'Wyewurk', which was not, as yet accessible to the general public.

John Ruffels, entered into the sprit of the place by appearing dressed like an itinerant 1920's banjo player, in a striped blazer, striped tie, and straw boater. He opened up his 192O's edition of Kangaroo and read selected vignettes of Lawrence's Mullumbimby. Afterwards the assembly applauded enthusiastically, suggesting a bright future for D. H. Lawrence at Thirroul. Local Councillor, Kerrie Christian had a double claim for being on the bill, as the local government representative for Craig Street; and as the great grand-daughter of Alfred and Lucy Callcott. (Mrs Callcott acted as landlady for her sister's house 'WyeWurk'. The name Callcott also features as that of two characters in Kangaroo.)

Kerrie told the crowd what Kangaroo meant to her. The Lord Mayor intervened and suggested Kerrie, as local representative, be delegated to have the name of the small park changed to "D.H. Lawrence Park'' such was the elusive praise for the novelist.

The moment of the actual unveiling then occurred .The two brass pieces had been affixed to some genuine Thirroul rock, which looked handsome in its ideal setting amid the coastal ti-tree, banksia and New Zealand bottlebrush.

Don Gray joined Joanna Skilton in thanking his Thirroul Village Festival Committee, Mrs Helen Bogue '(Wyewurk's neighbour), the Federal Department of Communications and the Arts, the D.H. Lawrence Society of Australia, and Renae Barnes the sculptor, for their monetary donations and work which all helped the project to success. A triumph of dreamer-meets-doer, the joint efforts of Joanna Skilton and Don Gray had proved the ideal combination in bringing the scheme to fruition.

At the end of proceedings, the entire populace evacuated to the Thirroul Girl Guides Hall whereto coffees was provided and Don Gray and Joanna Skilton cut a phoenix-decorated cake by Nancy Kettley, who also handled the catering. Eminent writer Frank Moorehouse, who was staying in Jamberoo moved incognito amongst the crowd, and said he enjoyed the occasion mightily. Other messages of congratulations and support were received from Opposition Leader Peter Collins; former Thirroul Librarian, writer, sculptor and D.H. Lawrence champion-now living in Queensland, Wendy Jolliffe; and London-based Lawrence publisher Gerald Pollinger (who also donated One hundred Pounds). 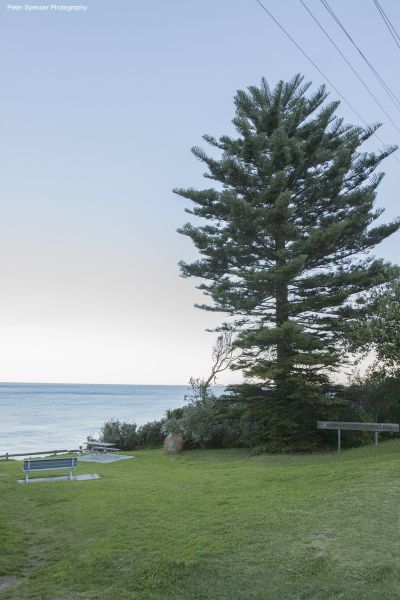