The General Meeting commenced at 2.25 pm.  The minutes of the previous meeting on the 19th of February were accepted as read.

The Secretary briefly reported on the success of the Seaside and Arts Festival.

The Treasurer reported on the current balance of $3,995.15

2) Barbara's reported on meeting with Mr. Coyte along with Kay Smith Manager Council Services on Friday where the poor condition of the children's beach park.  Many spiky plants are close to children and the maintenance is non-existent.  Council ground staff then object when we undertake basic maintenance.  The rubber matting is breaking up and the bubbler is leaking. The meeting was described as vacuous.

It was decided that the secretary should write to the General Manager and three Councilors emphasise the danger to children and prospect of potential litigation.

With Council elections scheduled for September, Murray proposed that we compile a list of concerns that should be addressed by Elected Councillors.  These were suggested as.

The carpark near the Cenotaph be modified to allow for a significant number of 2 hour parking spots as well as a designated spot for disabled parking.

Sections of the Thirroul Beach Promenade collapsing, and is close to 70 years old, can this problem be addressed as a whole, and not a patchwork of repairs?

Funding Distribution seems city centric to the detriment of the outlying areas.

Station Street through lacks underground drainage and this directly contributes to low level flooding on the NE corner of Gibson Park.

The distribution of dots on this map of the Illawarra show that Thirroul is due WCC's next skate park. 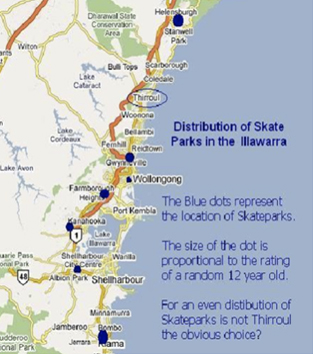 In view of the pending Council Election it was decided to move the AGM to the September 17 meeting and leave August 6 as a general meeting to allow time to discuss election issues.

Suggestions for method of communications with prospective Councilors are;

organise or participate a public forum

It was decided that the Executive should best decide how to distribute these issues to prospective Councillors.

The meetings for the rest of the year are as follows.

The meeting closed at 3.30pm