Introduction and welcome to AGM by the TVC President, Paul Tuckerman. Minutes of the AGM on 8 July
2018 were endorsed by the members.
Moved – Ray Smith; Seconded – Annette Jones.

The Secretary, Murray Jones outlined the activities of the TVC and its various sub committees:

Graffiti committee is ever vigilant and their work is ongoing with various members looking after specific
areas. The removal of recent billposter attack was successfully conducted by a team of 6 TVC
members(in two hours on a Wednesday morning).

The members have organised numerous letter box drops advising neigbours of contentious DA’s and led
objections by several groups of residents. Members have been involved ??in presentations at five
Wollongong Local Planning Panel (WLPP) meetings. Some have been successful, others not so:

Woodland Ave – This DA was for a house to be built on piers over the edge of the cliff at the northern
end of McCauley Beach. After a campaign led by local residents with TVC support, this DA was rejected
by the Land and Environment Court.

15 Pass Ave – Initially rejected due to numerous reasons. These were rectified and approved by the
WLPP. Sadly this is the first DA where a single residential block was subdivided into four townhouses. In
the end it passed all the metrics and rules for development.

7a Cochrane Road — Two storey duplex was approved on a battleaxe block by the WLPP, despite
neighbours speaking eloquently against the DA.

30 Hewitts Ave – Two storey duplex was approved by the WLPP after the front set back was increased as
a result of action by the neighbours and TVC.

Anglicare Development – the Secretary of the TVC sent in a submission to the Department of Planning,
Industry and Environment about this proposal. A revised proposal has been submitted and the TVC will
respond to this.

Gardening Group is active in many of the parks and gardens. The area along Seafoam Avenue and
outside the Phillip Street entrance to Thirroul Primary School look particularly good.

The TVC supported and participated in a Stall at the Seaside Art Festival.

The Secretary sent a letter to the Minister for Transport asking for resolution to the traffic problems
along LHD. The Secretary also gained some press coverage, which resulted in press responses from the
powers that be, as listed in the email to all members prior to this meeting.

The last TVC meeting was addressed by members of the National Trust and Heritage. This was a well
attended meeting. It is through such meetings and the action of TVC members that the membership of
the TVC has been expanded.

Email is the primary method of communication amongst members. 1647 emails were received. A
similar amount were sent. The mailinglist for the TVC has expanded from 97 to 143.
The Secretary stated that the work load had increased to the point where minutes of previous meetings
were barely ready in time for the next meeting. The Secretary proposed that this role be divided in two
– 1. Correspondence; 2. Minute taker. This was supported and agreed to by the TVC. 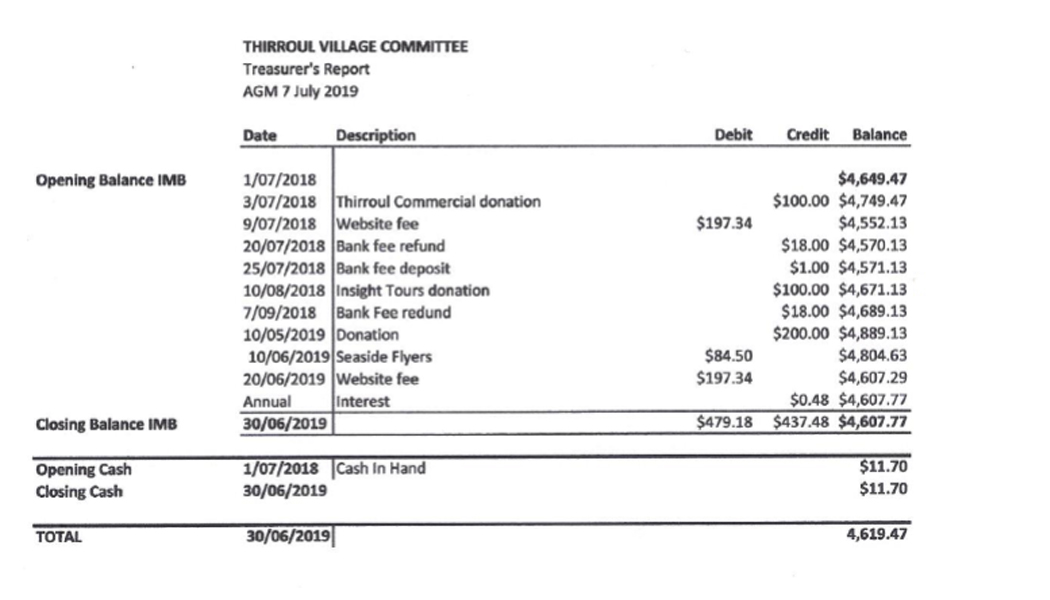 The TVC President recognised the efforts of all members and the sub committees’ actions as this makes
for a better, more liveable Thirroul.

All positions were then rendered vacant and the returning officer, Christine Hill called for nominations
for the vacant positions. The following office bearers were elected unopposed.

Officer bearers all selected and voted for. The newly elected President and Secretary for the year retook
their seats.

The TVC will continue to meet 5 times a year.
AGM Closed 4.25pm

Correspondence:
None – Already distributed by email.

Anglicare:
The secretary reported that it is difficult make sense of the Department of Planning, Industry and
Environment web site where the plans for the Anglicare development and associated feedback are held.

Ross Dearden said that Northern Illawarra Residents Action Group (NIRAG) had put in an earlier
submission but was unable to locate it at the web site. They have been assured it is there but have
lodged a subsequent submissionas they want to make sure that the bridge is built prior to construction
of the sub division. It was noted that the area set aside for the nursing home has been swapped with
that for the private housing.

The traffic report submitted as part of the development was dismissive of the effects of additional traffic
resulting from the development. No data was provided with this report to support the outcome. The
traffic report states that most of the traffic will head south not north. This discounts those who may
wish to shop at Thirroul or have to travel north for work.

According to the plans it seems that the walk bridge across the railway line between Sturdee Avenue
and Wilkies Street may be open to traffic. However, it was verified with Silvio Falato Team Leader
Regional Assessment, Planning Assessment from the Department of Planning, Industry and Environment
that this is not correct. This walkway will not be open to road traffic unless opened in an emergency.

The Department of Planning, Industry and Environment has extended the submission time till 8 July
2019. All submissions need to go via Silvio Falato (This email address is being protected from spambots. You need JavaScript enabled to view it.).

Murray, on behalf of the TVC, will write tonightto the Department of Planning, Industry and Environment
stating that construction of Tramway Creek Bridge was essential before any work was started on the
development. Construction of this link road should be a separate first step in this project before any
other construction and clearly specified in any modification to Anglicare’s 2006 Concept plan.

The other area of concern to be written about will be the density of the properties. It appears that the
average lot size per residential dwelling is under 180 m2. Some will be as low as 120 m2 This is much
smaller than most other lots in central Thirroul or Bulli, which are an average well above 250 m2. This is
of concern as the proposed dwellings are not in the centre of town, rather the edge of town where the
more spacious properties are generally located. Is it good town planning to place the highest density
housing, verging on a unique beach reserve, a considerable distance from the centre of town, away
from all shops and transport?
The TVC endorsed Murray to write a second submission to the Department of Planning, Industry and
Environment outlining our concerns about access and density.
Action: Secretary to write to the Department of Planning, Industry and Environment
Outcome: Completed

Murray wrote to the NSW Department of Transport, Roads and Maritime Services (RMS) about transport issues in and around Thirroul. A copy of this, plus articles in the Illawarra Mercury by the Lord Mayor, Gordon Bradbury; Councillor Leigh Colacino and the State Member, Ryan Park was sent to all in attendance.

There was discussion about the Lord Mayor’s contention in his letter to the Editor that population increase was not the cause of the traffic issues in the northern suburbs. In the article it was suggested that Council analysis indicated that over the past 4 year period that Thirroul experienced an increase of ‘200 people, with the northern statistical boundary, which incorporates the northern coastal suburbs up to Stanwell Park, experienced an increase of 28 people in that period’. Based upon these figures the Lord Mayor stated that the population increase was significantly less than elsewhere in the LGA. Questions were raised aboutthese figures and why such a short time frame was used for analysis. It was

pointed out that around 5 years agoaround 2000 people moved into the McCauley Beach Estate on the southern side of Thirroul.

When interviewed by the Mercury, Ryan Park reiterated that the community is still awaiting an overall traffic report. It was noted that there was no mention of the effects of train timetable changes and the effects this has had on traffic congestion in the area.
It seems that Councillor Colacino has an excellent appreciation of the general traffic issues in the northern suburbs and the problems that would be encountered if there was a major emergency on Lawrence Hargrave Drive (LHD) particularly on a weekend when traffic was extremely slow.

There was discussion about possible solutions to the traffic issues. A number of suggestions were put forward:

Thirroul Beach and drive on a coastal route to Sandon Point and Bulli Point. There was discussion about the negative effect of this on those residents on Point Street; however, it was considered that it could still be an option.

It was suggested that a formal response to the recent articles relating to traffic in the Illawarra Mercury should be sent by the TVC to the Mercury – maybe a letter to the Editor discussing the problems and possible solutions.
Action: Letter to the Editor to be sent to the Mercury by the Secretary responding to earlier letters by the Lord Mayor, Councillor and State Member.

It was agreed that the following suggestions should be put forwardto the Council and the RMS:

Christine Hill informed members that Council had recently made improvements to Jackson Park. She and Barbara Mebberson
had been invited to a meeting at the park last October with Councils Manager of Parks and Reserves. Also in attendance were
Mark and Andrew from the Northern Depot, who explain how the Council is now implementing a policy of ‘Greening
Wollongong’.

Various designs prepared by local staff were discussed, and the ladies were advised what would be removed, that new advanced
trees would be planted for summer shade and winter sun, and the hard- to-manage grass between the blueberry ash trees around
the perimeter would be abandoned and spread with deep mulch. The volunteers’ planting beds behind the benches would be
properly timber- edged and completely replanted with different species. The water-tap would be retained and also edged.
In April work commenced, with all the beds around seats formally edged and replanted with flowers, the perimeter re-organised
and a row of advanced deciduous trees planted down the centre of the park. Sadly, the 40 year-old azalea had to go, but it is
hoped the new permanent plantings will be more dry- weather-tolerant. New plants had been put in and edging placed around
all the garden beds. The park is more pleasant as a result and Council should be thanked for this work. It was suggested that a
letter of appreciation be sent to Council by the TVC.

Action: Letter to be sent by the Secretary to Council